Evidence that the pre 1900’s bible publishers even knew that “REPENT” simply meant to have a change of mind.

From the back of some older KJV Bibles the publishers added this: 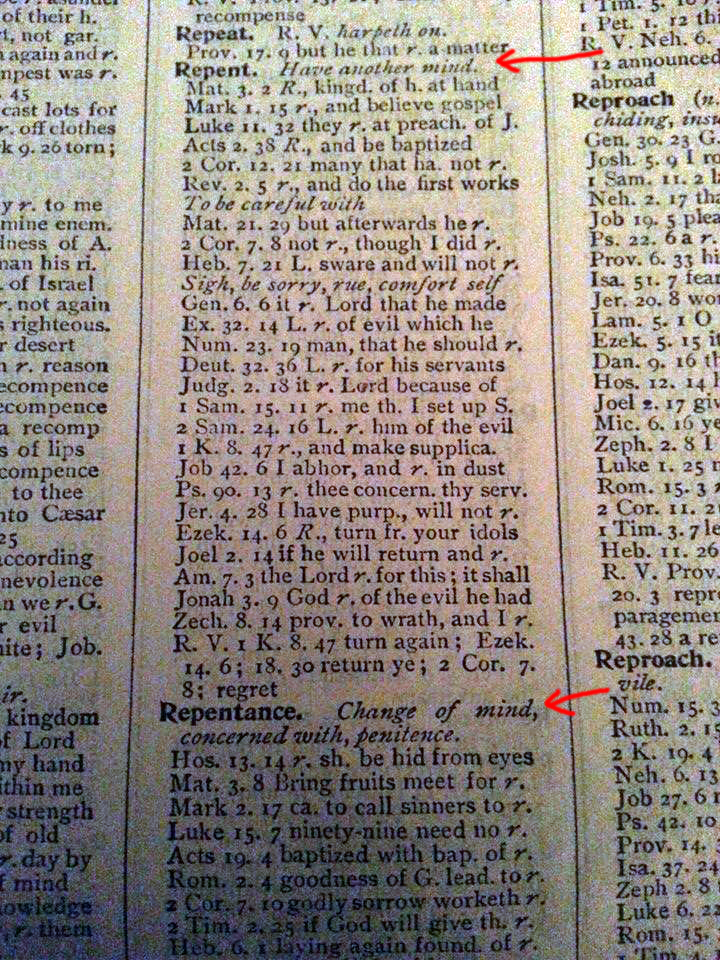 The word “REPENT” in itself does not and never did mean to “turn from sins” as so many today (such as Ray Comfort) like to spew.

Let the bible be the proof and do a search for the word “REPENT” in a King James Bible (or a Geneva, Tyndale etc) and in the uncensored bibles you will see that the first person to REPENT is God himself in Genesis 6:6 KJV

God was just having a change of mind about  having created mankind.
Lucky for us Noah found Grace in the eyes of the Lord and God did not destroy mankind completely.

And I like how in Exodus you see Moses asking God to repent. And God repents.
Was this about “turning from sin”?

However modern bibles made over the last 50 to 100 years have stricken the word “REPENT” from the scriptures where God repented in order to deceive and redefine the word to mean “turn from sin”.
That way they can make key doctrine scriptures such as Mark 1:15 which says “repent ye, and believe the gospel” be about having to turn from sin AND believe. (Such as what Ray Comfort and so many others now teach).

Here’s Genesis 6 again but in the NIV bible instead (Note the ESV, NLT all do the same here)

And also in Exodus when Moses asks the Lord to repent, the modern bible perversions change that to: 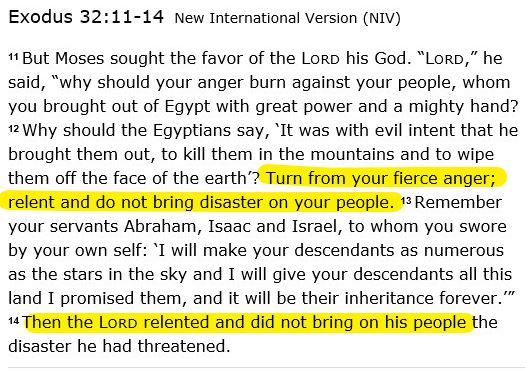 Now note that in the gospels the modern perversions leave “Repent” in the text!

To “Repent and believe” is NOT about needing to “turn from sins” in order to be saved.
When a person believes, they DID repent. That IS repentance. Because there was a CHANGE OF MIND that just occurred there and that is all those verses ever meant!

The KJV properly defines the word REPENT where if a person is using a modern perversion they will never know that what the likes of Ray Comfort is teaching them IS DEAD WRONG!

Of course you do need to realize you are a hellbound sinner to understand you need a saviour for salvation. But the one and only requirement for salvation IS Faith alone.

Ephesians 2:8 KJV
For by grace are ye saved through faith; and that not of yourselves: it is the gift of God:

Watch the video clip below:

2 thoughts on “Pre 1900’s Bible publishers knew that “Repent” simply means to have a change of mind.”