Folks… That thing pictured is NOT a girl. “It” is actually a 5 year old boy in drag! What real parent is such a failure that they would let a 5 year old boy to put on a woman’s garment and not correct such improper behavior for their son?

No child, and I mean no child is born understanding their gender or realizing their gender yet alone identifying as a “transgender” as they are spewing almost daily from the main stream media and news outlets. The parents have to teach them their gender! And missing either parental role in the home (missing mother or missing father) is also detrimental to a child’s development. I’m getting really sick of these filthy faggot quack psychologists and agenda front groups like the American Psychological Association Today these quacks are America is damned! See original story here.

Also see this story where a pair of lesbian dykes are giving their son hormone blockers to groom him to transgender into a woman later in life. SO SICK!
http://mrconservative.com/2013/07/21685-lesbian-couple-gives-son-hormone-blockers-says-the-child-is-transgender/

Deuteronomy 22:5 The woman shall not wear that which pertaineth unto a man, neither shall a man put on a woman’s garment: for all that do so are abomination unto the LORD thy God.

Yet ANOTHER child has been abused and manipulated to be a “transgender child”.
In this case, they give a boy ESTROGEN medication to hinder his development into a man! 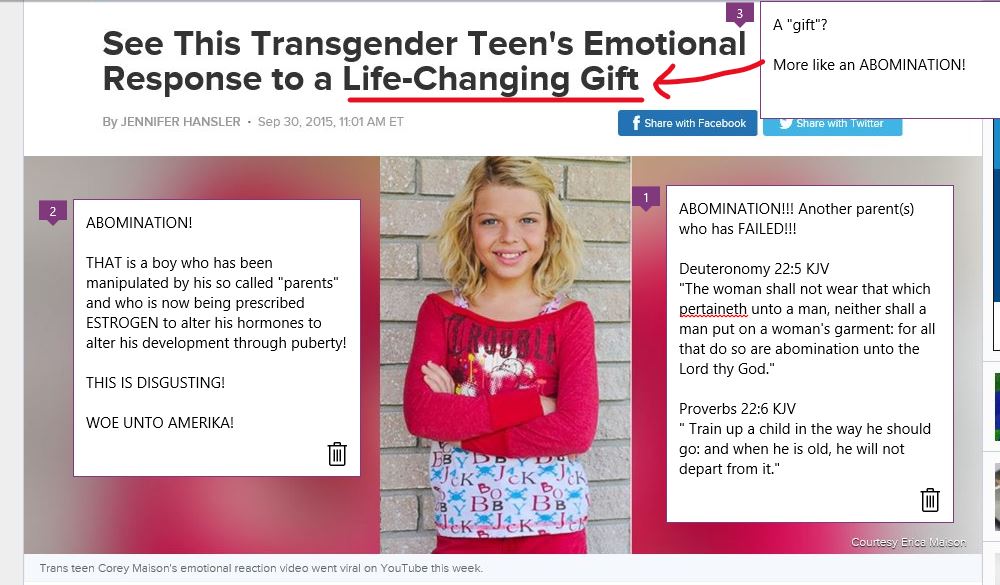 ABC, who I refer to as the American Butt****ers Channel, all out promotes that as a GOOD thing while this article is a little more accurate in what is happening to this child —> http://www.theblaze.com/contributions/this-gender-confused-boy-is-being-poisoned-and-abused-and-were-all-applauding/

The sick freaks have even made a youtube channel and this video to promote this abomination.
If anything IS child abuse, this is it!