Most people act as if bold IFB preachers such as Pastor Steven Anderson of Faithful Word Baptist Church and a few others like him who preach hard against Sodomy and who don’t censor Leviticus 20:13 KJV from their message are preaching something new or unheard of when the death penalty for Sodomites is mentioned.
The truth is that MOST preachers used to preach that biblical truth. It is just that most modern preachers are not and that leaves the fundamental ones to stand out on their own.

But  here’s something that most people today also do NOT realize when they scoff at the idea of executing Homosexuals like many other nations still do.
Many of our FOUNDING FATHERS obeyed the Bible and did instill the death penalty!
All colonies and then later the “States” had laws against Sodomy (people found in Homosexual acts) and many of the original laws included the death penalty.

There is a good write up on this at the SonsOfLibertyMedia website.
Here are some highlights of that:

IV. WHAT has been here observed…, which ought to be the more clear in proportion as the crime is the more detestable, may be applied to another offence, of a still deeper malignity; the infamous crime against nature, committed either with man or beast…. But it is an offence of so dark a nature…that the accusation should be clearly made out….

I WILL not act so disagreeable part, to my readers as well as myself, as to dwell any longer upon a subject, the very mention of which is a disgrace to human nature. It will be more eligible to imitate in this respect the delicacy of our English law, which treats it, in it’s very indictments, as a crime not fit to be named; peccatum illud horribile, inter chriftianos non nominandum [“that horrible sin not to be named among Christians”—DM]. A taciturnity observed likewise by the edict of Constantius and Constans: ubi fcelus eft id, quod non proficit fcire, jubemus infurgere leges, armari jura gladio ultore, ut exquifitis poenis fubdantur infames, qui funt, vel qui futuri funt, rei [“When that crime is found, which is not profitable to know, we order the law to bring forth, to provide justice by force of arms with an avenging sword, that the infamous men be subjected to the due punishment, those who are found, or those who future will be found, in the deed”—DM]. Which leads me to add a word concerning its punishment.

THIS the voice of nature and of reason, and the express law of God, determine to be capital. Of which we have a signal instance, long before the Jewish dispensation, by the destruction of two cities by fire from heaven: so that this is an universal, not merely a provincial, precept. And our ancient law in some degree imitated this punishment, by commanding such miscreants to be burnt to death; though Fleta
says they should be buried alive: either of which punishments was indifferently used for this crime among the ancient Goths. But now the general punishment of all felonies is the fame, namely, by hanging: and this offence (being in the times of popery only subject to ecclesiastical censures) was made single felony by the statute 25 Hen. VIII. c. 6. and felony without benefit of clergy by statute 5 Eliz. c. 17. And the rule of law herein is, that, if both are arrived at years of discretion, agentes et confentientes pari poena plectantur

Examples of SODOMY LAWS per State:

That the detestable and abominable vice of buggery [sodomy] . . . shall be from henceforth adjudged felony . . . and that every person being thereof convicted by verdict, confession, or outlawry [unlawful flight to avoid prosecution], shall be hanged by the neck until he or she shall be dead. NEW YORK

That if any man shall lie with mankind as he lieth with womankind, both of them have committed abomination; they both shall be put to death. CONNECTICUT

Sodomy . . . shall be punished by imprisonment at hard labour in the penitentiary during the natural life or lives of the person or persons convicted of th[is] detestable crime. GEORGIA

That if any person or persons shall commit sodomy . . . he or they so offending or committing any of the said crimes within this province, their counsellors, aiders, comforters, and abettors, being convicted thereof as above said, shall suffer as felons. 13 [And] shall forfeit to the Commonwealth all and singular the lands and tenements, goods and chattels, whereof he or she was seized or possessed at the time . . . at the discretion of the court passing the sentence, not exceeding ten years, in the public gaol or house of correction of the county or city in which the offence shall have been committed and be kept at such labor. PENNSYLVANIA

[T]he detestable and abominable vice of buggery [sodomy] . . . be from henceforth adjudged felony . . . and that the offenders being hereof convicted by verdict, confession, or outlawry [unlawful flight to avoid prosecution], shall suffer such pains of death and losses and penalties of their goods. SOUTH CAROLINA

That if any man lieth with mankind as he lieth with a woman, they both shall suffer death. VERMONT

Ah, but some will say, “Thomas Jefferson would have never stood for this. He wanted liberty and equal rights for homosexuals to get married.” Not according to the record he didn’t. In Notes on the State of Virginia by Matthew Carey (1794) Jefferson indicated that in his home state of Virginia, “dismemberment” of the offensive organ was the penalty for sodomy. I’m guessing there weren’t too many sodomites wanting that to take place. You might say that is Jefferson’s home state, but not Jefferson’s thoughts on the issue. Not so fast. Jefferson actually authored a bill penalizing sodomy by castration (The Writings of Thomas Jefferson, Andrew A. Lipscomb, editor (Washington, D. C.: Thomas Jefferson Memorial Association, 1904), Vol. I, pp. 226-227, from Jefferson’s “For Proportioning Crimes and Punishments)). The below capture of Jefferson’s legislation is courtesy of The Library of Congress and Apologeticspress.org. 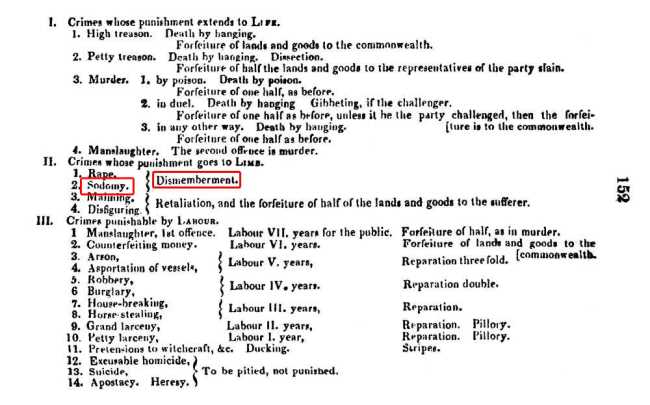 [UPDATE] Here’s another listing of the history of Sodomy laws since the founding of this nation!
http://digitalcommons.unl.edu/cgi/viewcontent.cgi?article=1061&context=englishfacpubs

4 thoughts on “What The Founding Fathers Believed About Homosexuality”