A bold Baptist Preacher rebukes the new Hollywood propaganda film: “American Sniper” and the cowardly killings of Chris Kyle and the killings of the innocent in Iraq and Afghanistan.

Check out the article posted by the theantimedia.org  & theguardian.com
From the antimedia.org:

American Sniper, the movie based on his words, makes Kyle appear as if he was conflicted by the scores who were killed by his marksmanship. Unfortunately for his legacy, his actual words tell a different story.

“I wondered, how would I feel about killing someone? Now I know. It’s no big deal”

Another quote from Kyle’s book describes his thoughts on the Iraqi people,

“Savage, despicable evil. That’s what we were fighting in Iraq. That’s why a lot of people, myself included, called the enemy ‘savages’…. I only wish I had killed more.”

The sniper also described his chosen profession of killing by saying,

“You do it until there’s no one left to kill. That’s what war is. I loved what I did… I’m not lying or exaggerating to say it was fun.”

Kyle also relays his lack of regret by saying,

“There’s another question people ask a lot: Did it bother you killing so many people in Iraq? I tell them ‘No.’ And I mean it.”

As far as the moral ambiguity that he dealt with, Kyle said

“I have a strong sense of justice. It’s pretty much black-and-white. I don’t see too much gray.”

The last passage from American Sniper that I will list truly demonstrates Kyle’s lack of heroism:

“A teenager, I’d guess about fifteen, sixteen, appeared on the street and squared up with an AK-47 to fire at them. I dropped him. A minute or two later, an Iraqi woman came running up, saw him on the ground, and tore off her clothes. She was obviously his mother. I’d see the families of the insurgents display their grief, tear off clothes, even rub the blood on themselves. If you loved them, I thought, you should have kept them away from the war. You should have kept them from joining the insurgency.” 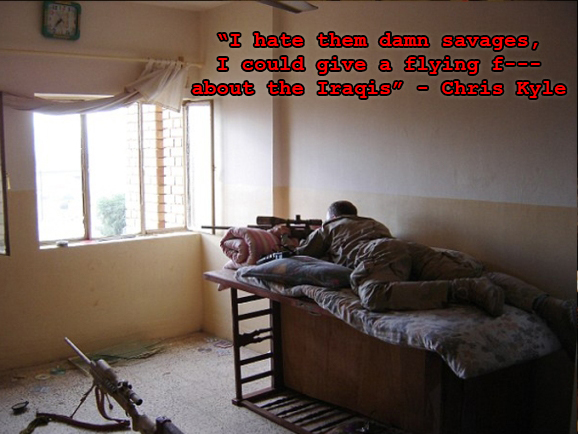 Chris Kyle hates the Iraqi’s and thinks they are nothing but savages.