Women who turn themselves “butch” to have the appearance of a man are what I refer to simply as “Counterfeiters”.

They can take all the hormones they want and get all the surgery they want and take on as many attributes of a man as they want but they will always FAIL to actually become a man.

Over the last few years I’ve seen more and more of these deliberate freaks and from time to time I have captured some of the more hideous examples in our society.
Check out the following videos.
Prepare to laugh and vomit a little all at the same time!

Here’s one of the funniest sightings. But unfortunately this one was several years ago before the advent of crisp clear HD capable smart phones. I was ordering food for my young children and I at McDogfood’s when these two wife beater shirt wearing counterfeiters kept giving my family the “Man Hating Lesbian Stares”.

Here’s another pair of silly dykes I filmed as they tried to ride their motorcycle out of the parking lot.
All I could do was LAUGH at this!

This pair of counterfeiters cracked me up!
It is really something how the “counterfeiting” today has taken on the attribute of sagging pants to complete their fake man ensemble. So pathetic!

Here’s a video of a few more counterfeiter spottings. The nasty counterfeiters in the second half sure gave me their typical “man hating lesbian stares”!

Here’s a freak that used to be seen in our old neighborhood.
That “thing” is a girl, not a boy.

Here’s my toddler and I discussing whether or not this “thing” was a boy or a girl.
The video may seem like a joke but seriously we need to show our young ones the truth before someone else convinces them to believe the lie.

This one was most disturbing.
A big fat ugly (by choice) lesbian cop.
Complete with her barbed wire tattoo around her fat arm.

She was in an unmarked SUV in Surprise, AZ and was wearing a bulletproof vest.
She probably used her fake powers to go kick some family’s front and back doors in to look for the suspected possession of an illegal plant.
Nothing better than hiring homosexuals if you want someone who will more than willingly violate their fellow man.
Click on the image for a larger view. 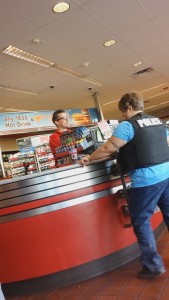 If that isn’t bad enough, seeing filthy perverts around kids is about the worst! 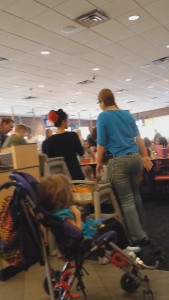 This hideous looking counterfeiter was reaching down to touch the poor defenseless child. 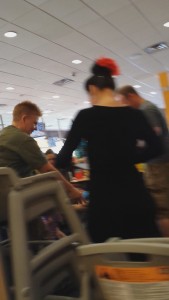 Here’s a nasty one I saw at a job. She was sagging her pants to reveal her boxer briefs all day. So vile!

Here’s the controlled media trying to do it’s best to document the transformation of Chas bono (daughter to Sonny and Cher Bono) without completely exposing what a freak this creature actually is. But even with the documentary being as pro tranny as it can be, Chas is undeniably a complete freak that thinks that paying quacks to mutilate her sex organs will transform her into a man.

Here’s the controlled media trying to normalize the God hating lifestyle by claiming that TODDLERS (yes little children) are identifying as “Transgender”.
A totally manipulated lie.

3 thoughts on ““Counterfeiters”: Unnatural and always fail to be a real man”