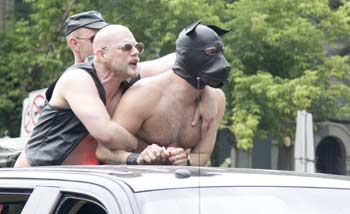 Two Fags demonstrating that they are just filthy animals

From wiki
The original name given to the observation of what we now know as AIDS was GRID, because Faggotism is the greatest (by far) cause of AIDS in AmeriKa.

Gay-related immune deficiency (GRID) was the name first proposed in 1982 to describe an “unexpected cluster of cases”[1] of what is now known as AIDS,[2] after public health scientists noticed clusters of Kaposi’s sarcoma and pneumocystis pneumonia among gay males in Southern California and New York City.[1]

During the early history of AIDS, when it was considered a disease of homosexual men, at least one physician suggested that male homosexuals reconsider the practice of engaging in anonymous sex.[3]