Once again a prominent homosexual man is guilty of a horrific crime against a child and where is the mainstream media on this??? 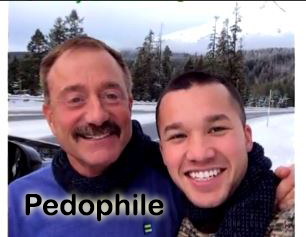 Portland developer, LGBT activist and Obama supporter Terry Bean is under indictment for charges of having sex with a 15-year-old.

5 Years ago this wicked LGBT Activist was defending another older man who was charged with having sex with an underage boy.
This man stated that the other pervert had merely “apologized” for the sex with the boy and that the city of Portland just needed to move on. Yup.

The first KOIN-6 video below contains the interview with Tim Nouanemany, Kiah Lawson’s mother [view it with adjoining text at KOIN-6 website HERE]:

Below is the KOIN-TV interview containing the interview with Bean’s Portland neighbor, Jeff Warila, reporting that Bean would frequently bring underage boys to his home [go to the 1:27 mark on the 2-minute video; watch it on YouTube HERE]:

Obama LOVED this man. Any surprise?

Looks like another Jerry Sandusky who will at worst merely be cast into a cage and funded by we the tax payers until they let him out a few years later to do it again.
That is, IF he is even punished.