Once again the LGBTP thought they had evidence of “homosexuality in the animal kingdom” only to fail… AGAIN!!!

Evidently there has been a video circulating by the LGBTP depicting two male lions, according to them, having “sexual intercourse”.

Alike the confused egg nesting penguins kept in captivity in the San Francisco zoo, the Sodomites spared no time in spreading their FakeNews upon social media.

Of course with the penguin “evidence” it wasn’t even close to being a sexual relationship but was the mere fact that two male penguins took turns nesting an egg. Which is not odd at all given that instinct causes the male to nest the egg when the female leaves to go hunt for food. And also there is the fact that the penguins were observed in captivity rather than in nature.
Yet somehow in the universe of LGBTP propaganda, observing two male penguins nesting an egg is equal to humans committing sodomy and thus proof of homosexuality in nature.

I became aware of their most recent claim when my friend Mark Taylor was rebuking Satanic propaganda on Twitter.
This hardcore LGBTP propagandist thought she’d offer her overwhelming proof for literal homosex within the animal kingdom after Mark correctly pointed out that the animals don’t actually have the means to commit the Sodomy and lesbianism that humans force upon each other.

So it seems that this time the Gaytheists and Phaggonostics really thought they had their smoking gun to prove that “homosexuality is natural”. That is. Until a reporter for National Geographic and Kathleen Alexander, an African lion expert who has spent 20 years of her life studying lions in the wild, called them for their B.S.!

More from the article:

And here comes the first LGBTPervert to spew complete nonsense!
Do they believe their own insanely far-fetched claims???
Oh. The female lion must really be “Intersex”. Of course! Duh!!! 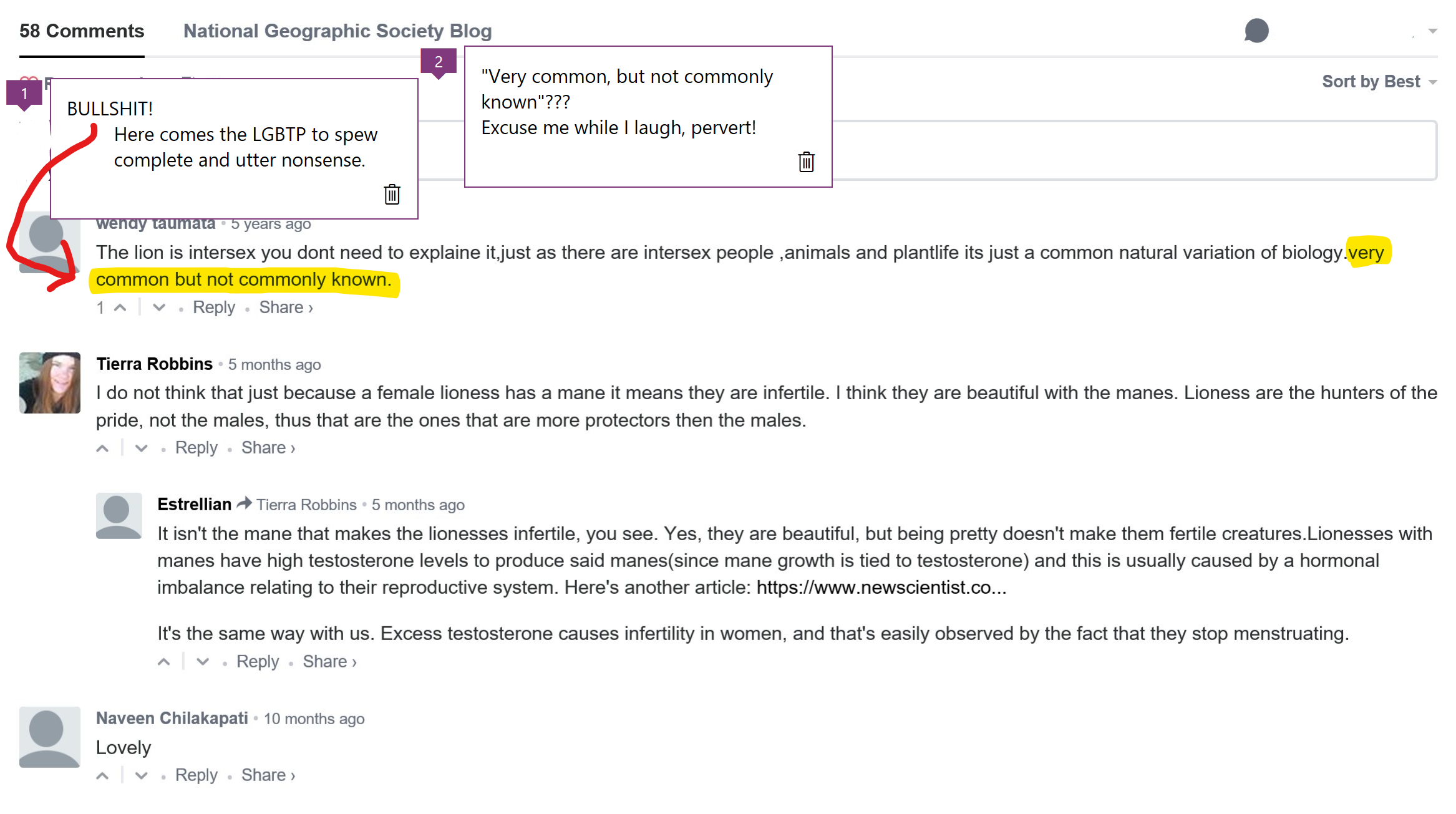 Intersex, which is also the LGBTP’s favorite go-to justification for their dysfunctional behavior, is a very exaggerated label which is actually referring to people with a mere birth defect within their sex organs, most commonly associated with a extragrowth or undergrowth while NEVER actually having both developed sexual reproductive organs. “Intersex” is also NOT common but rare. A lot more rare than they claim especially if you remove every man with a “micropenis” or female with an exaggerated clitoris from their stats.